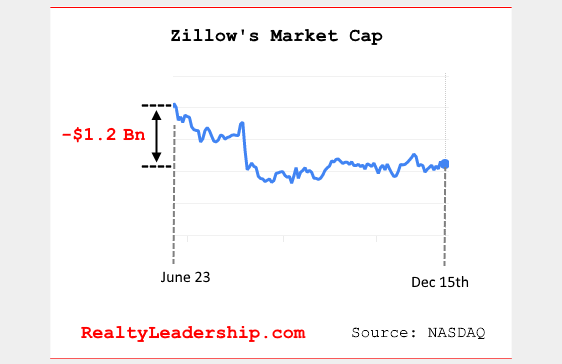 Zillow’s market value is down over $1.2 Billion

Zillow recently proposed an “instant offer” feature that resulted in a very excited market – but it didn’t go exactly as planned. This feature essentially allowed clients to buy houses in select markets by themselves, without working with an agent. It sparked a lot of interest, as many clients believed that it would help in saving them a significant amount of time and money. This was an extremely hyped-up product, and many people were looking forward to it, primarily investors. While this idea may have been good in theory with “cutting out the middleman,” it didn’t prove to increase company revenue or add any new profit to their corporation.

Study: How does Zillow compare to its peers?

Download study now (Free when downloaded before next Friday)

Since the hype of Zillow’s instant offer feature, there has been little data released from them about transactions, leading the stock market to assume that this launch was a flop. Their stock has dropped 18% between June 23rd and December 15th, which is precisely the time frame when their instant offer feature was introduced. Since then, the number of people searching for “Zillow” in Google has gone down 34%, and their market capitalization has gone down $1.2 billion. Before this feature was introduced, Zillow’s market value was over $6.4 billion and now it is less than $5.2 billion.

Number of people googling “Zillow” is down by 34%

It is important to note that this decrease in popularity and revenue is not simply due to a natural seasonal trend. Zillow actually tends to have their best quarter in Q4, when real estate agents have commission dollars to spend. Additionally, Zillow offers special incentives for their affiliate partners to recommend them to agents and brokers. Because of this, we can assume that this drop is not a factor of cyclical decline, but is instead due to the launch of their new instant offer feature.

The question that remains to be asked is this: “why didn’t this feature work?” The answer is simple. Real estate has been proven time and time again to be a people business – so it only makes sense that clients would have better luck working with other people (real estate professionals) instead of trying to figure out what to do by themselves. Just as you wouldn’t look up how to do your own root canal, you also wouldn’t look up how to conduct your own real estate transactions. Much like anything else, the results will always be better when working with a professional. In this case, clients will be making the biggest financial transaction in their lifetime – they want to make sure it’s done right.

Study: How does Zillow compare to its peers?
The Full Study Contains:

Download study now (Free when downloaded before next Friday)

3 Steps to Stay Safe as an Agent 0

Home Prep: Getting the Most Out of The Look 0

More experience means more money when it comes to splits 0